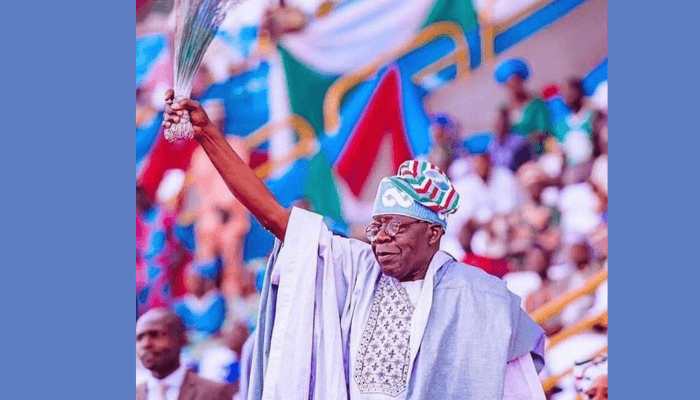 Tinubu also said he and his party are not spewing out fake statistics and wrong figures like other candidates and political parties, hence APC is progressive party.

The APC presidential candidate stated these while addressing journalists after a close door meeting with the National Working Committee (NWC) of the party at its national secretariat on Wednesday.

Tinubu had stormed the APC national secretariat, known as Buhari House, located on number 40, Blantyre Street Wuse 11, Abuja for the first time since his emergence as the party’s presidential candidate on June 8; three months ago.

The former Lagos State governor was accompanied by his running mate, Kashim Shettima, Femi Gbajabiamila, speaker of the House of Representatives, Simon Lalong, governor of Plateau state, director general of the presidential campaign council, and other governors.

“We are not threatened. We are confident and we are very proud of ourselves, we are in an orderly manner, we are committed to democratic principles and values. We are not bickering in any way and you know that,” he said.

On what Nigeria should expect from him if he becomes the president of Nigeria in 2023, Tinubu told supporters to be patient.

“Let the election be over. That’s one step. We have to comply with INEC regulations regarding the election process,” he said.

“Onces we finish that, we will unveil to you those things that we have in plan for the country and our objectives, our creed, our commitment to development, our commitment to transformation, and our determination to bring help to the teeming Nigerians.”

Speaking before the meeting went into close doors, Tinubu said there was no rift between him and Abdullahi Adamu, the APC national chairman, saying it was the handiwork of rumour mongers.

“To the rumour manufacturers, I read in some papers about disagreement between myself and the chairman and that was a very big lie. They didn’t know that we have come a long way. The big masquerade dance is not in the cage but in the market square.
And that is what Adamu used to be, full of wisdom, we were governors together, before God put us together on this project again. He is going to deliver as the Chairman of the party for me to become the president of Nigeria. And I am very confident of that.

“They can say whatever they want to say, throw all the jabs that they want, we are a party strongly determined to fulfil our dreams of turning Nigeria to a very progressive, highly developed, prosperous country. What we came here to do today is to discuss the campaign which is a few days away.

“When INEC will lift the ban, how do we work out the details, work together, implement all we have been saying,  who are the members of the campaign council, who will not be members, and I beg you not to be angry if you are left out because we are going to give you another responsibility. Not every member here can be a member of the presidential campaign council.”

Peter Obi and the power of hope