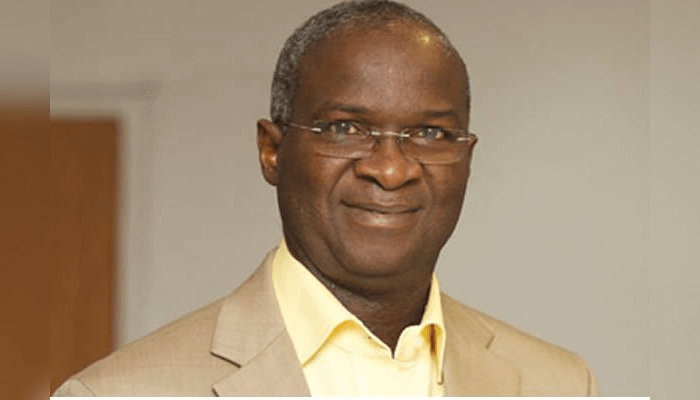 Babatunde Raji Fashola, minister of works and housing, says he will make known his preferred candidate for the 2023 presidential elections by September when the campaign commences.

Fashola made this known during his keynote address of the 6th Babatunde Raji Fashola (BRF) Gabfest – to celebrate his 59th birthday in Lagos.

“I belong to a political party; I am aware that the campaign season has not started and that this programme and what I say are not intended to advance or limit the cause of any political party or their candidate,” he said.

“When the time for campaigns comes upon us, I intend to be involved,” he added.

Speaking on efforts targeted at creating a platform for active involvement of youth in Nigeria’s future and ensuring that the electorate vote for the right candidates in the 2023 elections, he urged Nigerians to assess candidates based on their past achievements in office.

“I urge you to vote by holding debates and town halls where you put questions to the candidates to test their abilities,” he said.

“I urge you to vote by looking at what the candidates have done before, this is like asking for the referees during an interview or talking to a previous employer,” he further said.

“This is how to recruit an employee. Not by anger,” he added.

Fashola explained that the local government is the most important arm of government because they are at the grassroots and responsible for basic government provisions.

He stated that democracy was created to end tyranny, minority rule and dictatorship, adding that it replaced the rule of one person with the rule of many people, now called the majority.

During a panel discussion at the programme, experts urged Nigerians to look out for ways to hold the Independent National Electoral Commission (INEC) accountable and how to support it to carry out its duties efficiently and effectively.

Speaking on vote-buying, the experts noted that it was a validation that votes count in the country while calling on Nigerians to ensure they register, select their candidate, vote and protect their votes.

THE EDIT – The Style Scribe

Yet another round of African debt restructurings (1)

Telehealth: An opportunity to increase quality health access in Africa