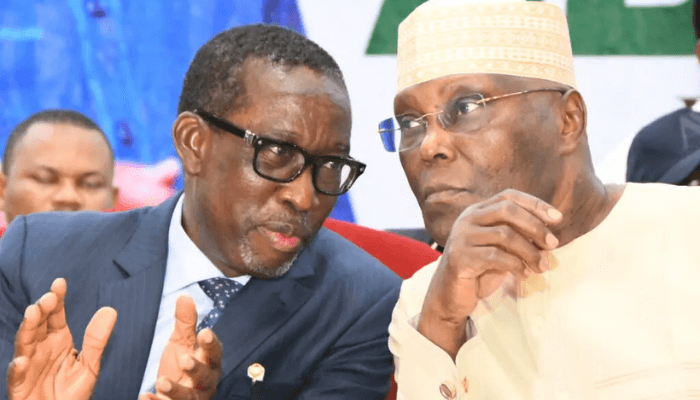 Ifeanyi Okowa, governor of Delta State and the vice-presidential candidate of the People’s Democratic Party (PDP) has said that the emergence of the Atiku Abubakar as the presidential flagbearer of the party presents a great opportunity for an Igbo man to become President in the future.

The current governor of Delta State said this during an interview on Arise TV on Friday night.

He stressed the point that only two geopolitical zones are yet to produce a president. That is the Southeast and Northeast.

According to him the need to correct the injustice metted to both regions is now.

“Our candidate, Atiku Abubakar is from the northeast… And along with the southeast it appears that these two political zones have been short-changed because no sons from these two zones have been president of this nation,” Okowa said.

“They obviously have a point and I believe that we sympathize with them. And I believe also that since one of us has emerged from the Northeast at this point in time, it is a good sign for the future that if the Northeast has the opportunity and by special God’s grace Atiku Abubakar becomes the president, which I think by God’s grace he is going to become by the special grace of God.”

He expressed belief that an Atiku victory at the polls would give the Southeast a great chance at the Aso Villa in future elections.

According to Reuters, Seifeddine Makhlouf, a prominent lawyer and fierce critic of President Kais Saied of Tunisia, was on Friday sentenced by a Tunisian military appeal court to a year in jail and banned from his job for five years for insulting a judge.

President Saied, who decided to throw away the democratic structures that brought him into power and rule by decree after he dissolved parliament, has been facing stiff criticism from the public over his undemocratic behavior.

Anouar Awled Ali, lawyer for Makhlouf, criticised the handling of the case and noted that this is exactly what President Saied wants, where freedom of speech will be truncated. According to him, “The verdict is a real farce. … This is the judiciary that Saied wants.. a judiciary that he could control it and use it against opponents”.

Venezuela to resume oil export to Europe after two years

Venezuela is about to resume oil exports with a 650,000-barrel-cargo chartered by Italy’s Eni to Europe. This will be the first time in two years that a country sanctioned by the US and facing the worst economic crisis in the world will be allowed to export oil to Europe.

According to Reuters, “the U.S. State Department sent letters to Eni and Spain’s Repsol in May authorizing them to resume taking Venezuelan crude as a way to settle billions of dollars of unpaid debt and dividends owed by the OPEC-member nation.”

The good news for Europe is that a second tanker chartered by Eni, the Pantanassa, is heading towards Venezuela and is expected to load around 2 million barrels of the same grade. This is according to Eikon data made available to Reuters.

US stocks end mixed on Friday

The major US stock indexes finished the week in the green, with the tech-heavy NASDAQ leading the pack with gains of up to 1.4 percent, while the S&P 500 gained only 0.2 percent. The Dow Jones Industrial Average gained 0.1 percent, trailing the S&P 500.

According to tradingeconomics, “the main averages fell for a third week in a row, with the S&P suffering its steepest drop since 2020, down 5.7 percent, while the Dow shed 4.8 percent and the NASDAQ finished 4.4 percent lower, as investors grew concerned over higher interest rates to fight surging inflation that would drag the economy into a recession.”

Apparently, the rate hike initiated by the US Fed has been replicated by the central banks of Switzerland and Britain, in a move to curb rising inflation.

According to tradingeconomics, WTI crude futures briefly fell to a four-week low of $108.25 on Friday before recovering to trade at $117.08.

The brief loss of 8.8 percent was a reaction of the market to the recent wave of interest rate hikes by some of the major central banks in the world, which has sparked fears of a global recession.

Analysts are of the view that these rate hikes are needed to curb inflation, which is “eating” down economies, a situation caused by the Russian war in Ukraine.

Building resilience for sustainable success in an age of disruption

These nine vehicles are still in use after 100 Years –

The Best Ways to Overcome Choice Paralysis During Your Remodel