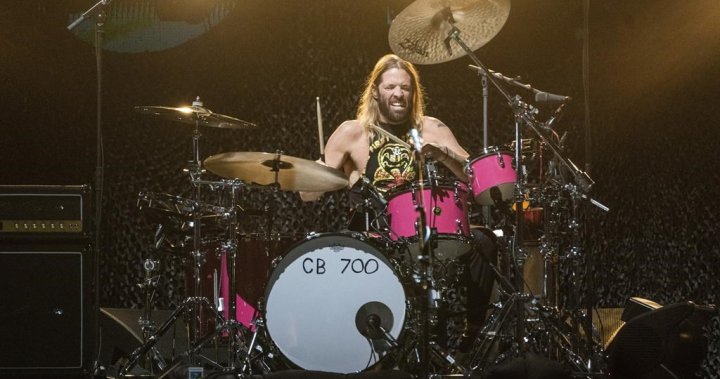 The Foo Fighters have announced their return to the stage, scheduling two special tribute concerts later this year to honour the life of their former drummer, Taylor Hawkins.

“For our dear friend, our bada– bandmate, our beloved brother…Foo Fighters and The Hawkins family bring you the Taylor Hawkins Tribute Concerts,” the band announced Wednesday on its Instagram account.

The remaining bandmates will appear at London’s Wembley Stadium on Sept. 3 and the Kia Forum in Los Angeles on Sept. 27.

Hawkins died unexpectedly in March while on tour with the band in Bogotá, Colombia. He was 50 years old at the time.

The band was scheduled to play at Festival Estéreo Picnic that day, but cancelled the remainder of their tour.

An official cause of death is still pending, but a preliminary autopsy shortly after his death determined that his heart was enlarged to 600 grams, twice the size of a man his size and age.

Coinciding with the news of the upcoming concerts, Hawkins’ wife Alison released a statement on her late husband’s Instagram account for the first time since his death.

RIP Taylor Hawkins. What do you do when a member of your band dies? It’s complicated

“As Taylor’s wife, and on behalf of our children, I want to share how much you meant to him and how dedicated he was to ‘knocking your socks off’ during every performance,” she wrote to Hawkins’ fans.

“Taylor was honored to be a part of the Foo Fighters and valued his dream role in the band every minute of his 25 years with them. We consider every band member and the extended Foo Fighters team our family.”

Hawkins joined the Dave Grohl-led group in 1997 after original drummer William Goldsmith left, making him one of the longest-serving members of the 28-year-old band.

He played on every one of Foo Fighters’ eight albums since, providing vocals and other instruments in addition to drums. He also co-wrote some songs.

A Guide to Hiking to La Ciudad Perdida – Uncornered Market