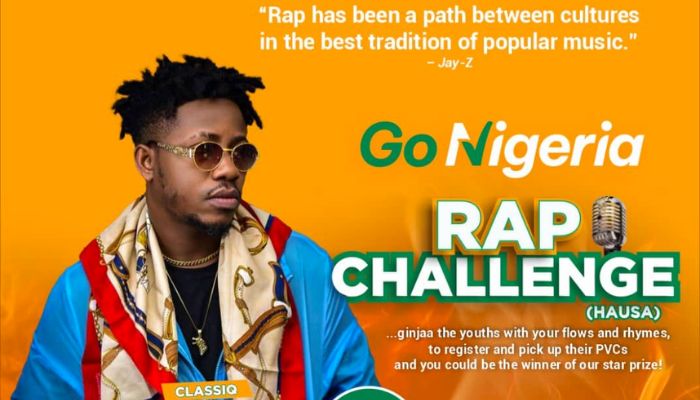 GoNigeria has launched the GoNigeria Hausa Rap Challenge, a contest for young Nigerians between the ages of 18 to 34, with incentives including N1m for the 1st prize winner.

The organisation said the initiative is in line with its stated objective of becoming an important voice for driving Nigerian youths to actively participate in the nation’s electoral processes and redefining the political trajectory of Nigeria come 2023.

Other prizes include N600,000 and N400,000 for the first and second runners-up respectively, according to a statement on Thursday.

It said: “Spurred by the enormous resourcefulness of talents and skills that abound in the creative space amongst Nigerian youths, GoNigeria is seeking to harness this energy plus the anger in the minds of some youths in a positive direction.

“These GoNigeria competitions act as an incentivising platform that should also boost political participation by Nigerian youths, as the messaging requires participants to showcase their communication skills beyond entertainment alone, but by also delivering an important message through rap that is consistent with the ongoing GoNigeria advocacy campaign.”

According to GoNigeria, rap can serve as a strong communication platform as riveting messages have emanated through it in the past that have helped to impact and change societies and/or attitudes in some countries.

It said: “The Hausa Rap Challenge will be anchored by Buba Barnabas Luka (Classiq). This online rap contest will run from Friday, 10 June, 2022 to Thursday, 30 June, 2022. Only Nigerian youths between the ages of 18 to 34 years and who have Permanent Voters Cards (PVCs) are eligible to participate.

“Participants are required to send in a 60 seconds rap video, in which they must show their PVCs or registration slip and play with the word PVC or Permanent Voters Card in their rap production. The video must adequately communicate the important need for Nigerian youths to GoRegister and get their PVCs before 30 June, 2022.”

“Contestants must post the video on all their social media platforms with the hashtag #GoNigeriaRapChallenge and tag @AnapFoundation. Videos which are longer than 60 seconds and/or videos without a PVC component will be disqualified,” it said.

GoNigeria is an initiative of Anap Foundation, a non-profit organisation which is committed to promoting good governance.

The statement said Anap Foundation, through its GoNigeria Initiative, had been partnering with GoAdvocates and enlightened celebrities, corporate bodies eager to support the initiative via co-branding as well as many enthusiastic volunteers who will help to amplify the messaging to Nigerian youths.

“The real objective is aimed at encouraging Nigerian youths, within the eligibility demographics of the challenge(those aged between 18 and 34 years), to go and register with the Independent National Electoral Commission, and collect their PVCs before the expiration of the commission’s last Continuous Voter’s Registration deadline of 30 June, 2022 in preparation for the 2023 elections,” it said.

The impact of e-commerce on supply chain