The number of adult Nigerians who were financially excluded increased from 36.6 million in 2018 to 38.1 million in 2020, according to Enhancing Financial Innovation and Access (EFInA).

These are adult Nigerians who did not have access to financial products and services and their economic activities could not be felt directly within the financial system.

Financial inclusion is of interest to national governments and development financial institutions because it is expected to help “address poverty and shared prosperity byimproving and smoothing household incomes at the same time as reducingvulnerability to shocks, improving investments in education and health, andencouraging the growth of businesses and related employment”, according to the World Bank.

Nigeria currently has over 80 million individuals living in poverty. As financial inclusion is linked to a number of SDG goals, this subject is constantly reviewed to know if real progress is being made.

Banks and telecommunications companies have been on the forefront of this cause, through the deployment of innovative solutions that give unbanked Nigerians financial access and inclusion.

A good metric to assess progress in Nigeria’s financial inclusion is by the growth in the number of customers of Nigerian commercial banks.

Other parameters include branches of banks, number of Automated Teller Machines (ATMs), debit cards in circulation, and what is more, the patronage of banks’ digital products by customers from all walks of life.Among all the metrics identified above, banks’ branches recorded the least growth rate in 2021.

The analysis of available data extracted from their audited financial statements of 2020 and 2021, shows that the total number of the branches of tier one banks increased by just 6.7 percent, from 3,219 to 3,435, which means from an average of 87 branches per state (36 states plus FCT Abuja) in 2020 to approximately 93 branches per state in 2021.

The higher the number of branches of banks in the country, the higher the likelihood of access to financial services in the underserved communities.

“Banks are still opening branches but they are more strategic about it in terms of target market, location and security in the country. The world is fast evolving with the internet and it offers more opportunities with ease seamlessly too. And almost everyone has a phone so it is easier to get them to open accounts via the same web”, Oluyemisi Bowale, a banker, said.

What factors are promoting financial inclusion? 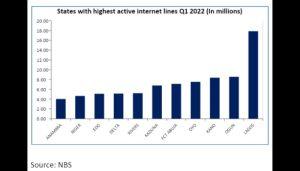 The increase in both active voice and internet lines was associated with increasing financial transactions through mobile platforms and USSD.

According to the Nigerian Inter-Bank Settlement System (NIBSS), mobile payment transactions skyrocketed from N136.85 billion within the first four months of 2019 to N4.86 trillion in the corresponding period of 2022, amounting to an increase of 3,451 percent.

According to the findings of Uduak Michael Ekong and Christopher Nyong Ekong published in the Journal of Internet and Digital Economics, a unit rise in ATM usage in Nigeria increases financial inclusion by 0.012 units.

Also, a percentage rise in POS usages raises financial inclusion by 1 percent. Apart from that, agent banking during the reference period witnessed unprecedented growth with many banks deploying thousands of agents especially in the rural areas.

In spite of the not-too-impressive growth in the number of branches of commercial banks, there was growth in deposit mobilisation in Nigeria. The customer deposits of the five tier one banks increased by 18.6 percent in 2021 to N29.66 trillion, up from N25.007 trillion in the previous year. 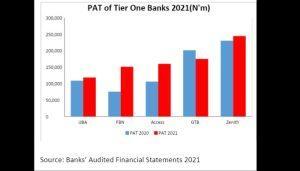 Another area success is being recorded in financial inclusion is the rising usages of mobile, internet and digital platforms for bill payments which have increased in recent times.

A number of banks how have very strong digital platforms as their selling points. And according to NIBSS, electronic bill payments surged by 387.19 percent in the first four months of 2022 to N923.24 billion as against N189.5 billion in the corresponding period of 2019.

NIBSS defines “e-BillsPay is an electronic bill payment platform that facilitates the payment of Bills, fees, levies, premiums, and subscriptions etc. by the banking public through electronic payment channels provided and managed by banks”.

Industry sentiments suggest that commercial banks in the country may continue with the current trend of fewer branches. In recent times, banks were attacked in Edo, Ogun, Osun, Kwara, Abia, and Ondo states. With insecurity not abating yet, the enthusiasm for opening more branches is waning.

Financial inclusion is rising in Nigeria in view of the increasing number of bank customers and debit cards in circulation.

The increasing use of agent banking has been felt both in the rural and urban areas. All these achievements were made when the growth in their branches was just 6.7 percent during the reference period.

Borrowing cost to spike as CBN hikes rate to 14%

‘Every Indian is a brand ambassador in Nigeria for his country’ –

Turning diaspora remittances from consumption and social support to investments (2)