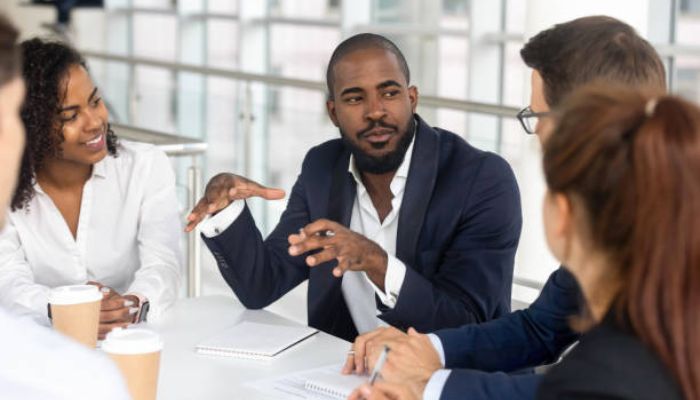 Research studies have attempted to relate organisational performance to different leadership styles, such as productivity and staff morale. The two dimensions that have shown up are a concern for tasks – getting things done and respect for relationships – getting along well with people. Research indicates that relationship-oriented leaders tend to have more satisfied subordinates and that this is true across different cultures.

Leaders spend much of their time shaping messages presented to various followers, subordinates, and stakeholder groups. It is also true that the more leadership responsibility you have, the more your job will focus on communication.

Therefore, leaders need to give much consideration to how much is communicated without speaking. If a leader is going to do business with people from another culture, being unaware of non-verbal communication can put barriers to a successful relationship. When a leader fails to understand this, he will mostly be ineffective and unable to influence others.

…in all non-verbal communication areas, a leader must have the ability to observe others’ behaviour, be mindful of it, and be skilled at modifying his behaviour to lead effectively and inspire people across cultures

The Gambian government appointed a five-man delegation led by its Foreign Minister to inspect one of Europe’s biggest cocoa processing factories in Birmingham, United Kingdom. The delegation was scheduled to inspect the factory and understudy the company’s business processes and operations to build the same in the Gambia. On arrival, they were received by the Senior Managers in charge of Business Development and factory operations, Polish and Brazilian, respectively.

However, the Foreign Minister was disappointed they were not received by the Managing Director, whose office they were communicating with until their arrival. They were immediately led into the factory by the Brazilian overseeing the operations and dismissed quickly after the inspection without refreshment and drinks. During the inspection, the Polish addressed the Minister by his first name and not his title; he also handed the Minister a construction hat using his left hand.

The Minister walked ahead of others and refused to make eye contact or shake hands with the Polish he considered disrespectful. He was unresponsive and refused to answer any questions directly, and deferred all responses to another team member.

After the factory inspection, the Minister and his team were informed that the company’s Managing Director is waiting to receive them at his office for further discussion. On hearing this, the Minister said to the team that we are returning to the Gambia immediately.

In the above scenario, all these behaviours by the characters are examples of how we typically communicate non-verbally, and we rarely consider it at a conscious level. The characters failed to appreciate the codes and conventions of the other. If they had been more culturally intelligent and had acted accordingly, the bad feelings and unfavourable outcomes could have been averted.

From the above scenario, we can deduce three components that indicate inter-cultural flexibility and competence for leaders. In brief, culturally intelligent leaders much have:

1. the knowledge to understand cross-cultural phenomena

2. the mindfulness to observe and interpret particular situations

3. the skills required to adapt behaviour to act appropriately in a range of situation

Using the same above scenario, here are five things leaders need to understand about non-verbal communication:

Facial expressions: – indicates basic human emotions, joy, anger, disgust, and fear. They are instinctive and universal. However, people disguise their emotions in some cultures by adopting an expression that hides their true feelings. For example, the customer service personnel beaming with a smile may not necessarily be happy to meet new customers.

Eye contact: – most cultures have different conventions about eye contact depending on their status, age, and gender. Africans believe eye contact conveys either anger or insubordination. In Western countries, moderate eye contact in a conversation communicates interest and friendliness. However, excessive eye contact may be considered rude, and a lack of eye contact as hostile.

Gestures: Hand and arm movements are often used as physical accompaniments to words, supplement them, or provide a visual illustration. Often gestures are meaningless without words, but other gestures have established meanings. While pointing may indicate a direction, but pointing may be an accusation or warning in some parts of Africa.

Physical proximity or conversational distance: – This varies according to the gender, age, or authority level of the other person and, more importantly, the cultural inclination of the person. Greeks are known to be touchy and stand close in a conversation.

The tone of voice: – is an expression of a person’s values and way of thinking, and it cannot be considered lightly. When speaking, the tone of a leader’s voice can instigate hurt feelings or even an argument; the wrong tone of voice can be a put-off.

In conclusion, in all non-verbal communication areas, a leader must have the ability to observe others’ behaviour, be mindful of it, and be skilled at modifying his behaviour to lead effectively and inspire people across cultures.

How Porsche Developed a Digital Twin – Grape Up

How OEMs Can Leverage Subscription Business Model – Grape Up