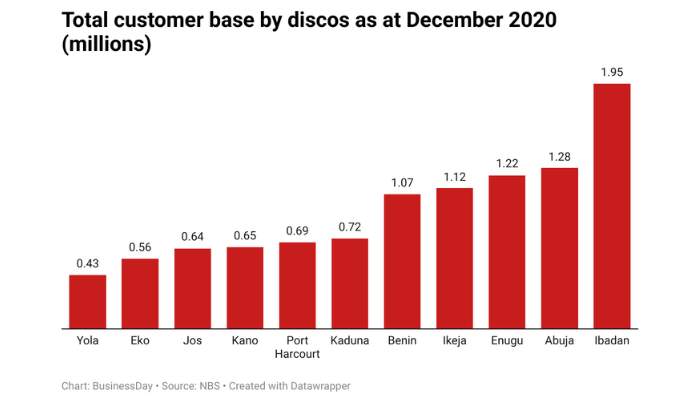 Ibadan Electricity Distribution Company (IBEDC) has topped the list of Discos with the highest number of customers, according to the National Bureau of Statistics (NBS).

The report titled “Electricity Report 2015-2020,” shows that customer numbers under the reviewed period increased successively on a year-on-year basis, with the highest numbers recorded in IBEDC. Generally, it rose from 6.99 million in 2015 to 10.37 million in 2020, it said.

“In 2015, Benin Electricity Distribution Company (BEDC) recorded the highest number, while IBEDC stood top between 2016 and 2019.

Oluwaseun Arambada, research analyst, FBNQuest merchant bank said IBEDC topped the list because it serves more than one state as opposed to Ikedc which serves only a part of Lagos.

“Then, we still cannot take away the effort of IBEDC over the years,” he said.

On the other side, the report showed that the estimated billing customer records a year-on-year positive growth rate consecutively from 3.85 million in 2015 to 6.86 million in 2020.

“When the number of customers by Distribution Company (DisCo) is disaggregated between 2015 and 2020, IBEDC has the highest customer numbers compared to other DisCos,’ the report shows.

Looking more closely at the 2020 customer distribution, IBEDC reported 1,953,171 customer numbers, accounting for approximately 18.84 percent of the total for the year.

Furthermore, Yola Electricity Distribution Company (YEDC) had the lowest number of customers (428,621), accounting for 4.13 percent of the total.

The trajectory of metered customers has shown annual positive growth rates consecutively except in 2020.

By definition, estimated customers do not own meters but are supplied electricity and billed.

“Yet, this positive trend continued in 2020 with estimated customers of 6.86 million,” the report claimed.

Can You Eat Halloumi Raw? Is It Safe Or It Can Make You Sick?

Violent attacks rise in Nigeria by 47%

Schools are open, but we won’t teach, ASUU tells FG on resumption order