The last weekend in June was beautiful, amid the drizzling rain that kept Onikan, an art and culture hub of Lagos, wet. But the weekend was even more beautiful with OBSIDIAN, an engaging and exceptional art exhibition, which was in its final week.

The uniqueness of the two-week exhibition, which ran from June 12 – 26, 2022, is the varied venues, the optimization of time and space, the rare issues being highlighted and the talented artists that led in the various performances, installations and conversations.

The exhibition curated by Raphael Guilbert in collaboration with Tushar Hathiramani enthralled visitors in the two venues of; hFactor Collective, a contemporary art space located at #30 Ajasa Street, Onikan, Lagos and at Centrum Berlin, a platform for contemporary art, offering space and support for experimentation and for the development of new works in Berlin, Germany.

Again, the title of the exhibition gave an in-depth insight on the rationale for the show. The title ‘Obsidian’ is really uncommon, but Obsidian is a hard, dark, glasslike volcanic rock formed by the rapid solidification of lava without crystallization.

Ironically, volcanic eruption, which depicts nature’s anger, is not all bad; something good comes when the heat is over and that is the beautiful and solid Obsidian, which can be used for jewelry, weaponry and all that.

This was why Sheila Chukwulozie, Nigeria’s multidisciplinary artist and Jasminfire, a solo music artist and a seasoned Grammy-nominated string arranger, with Ella Finer teamed up to explore the title from different perspectives, different locations, for different audiences but for the same purpose.

The artists excited the audiences across genres such as installation, film, performance, sound, conversations and other art forms.

Explaining the format of the exhibition, Tushar Hathiramani, one of the curators and co-founder of hFACTOR Collective, said though separated by space between Berlin and Lagos, Jasminfire and Sheila Chukwulozie were connected by live video stream projected onto life-sized screens. From their interactions through the virtual portal, both were able to create a new performance work that examines the power of emotion.

Speaking further, he said that Obsidian builds from two sound and movement works made by the two artists separately. While Chukwulozie takes the viewers through a ceremony of personal yantras using the seven tones of seven singing bowls, Jasminfire works within viola, cello and voice meditations.

Moreover, by drawing from their personal experiences of repression and release, the two artists were able to address how suppression in a “society of niceties” can shape an individual into a shadow self.

The above was obvious on meeting Chukwulozie at hFactor, 30 Ajasa Street, Onikan Lagos, on my visit on Saturday June 25, 2022.

The cheerful multidisciplinary artist wowed me with her enthralling performances. First, she offered me a headphone to enable me to listen and digest one of her talks/sound performances. Afterwards, I traveled across Lagos and Berlin to join in a discussion featuring Sheila Chukwulozie & Jasminfire with Raphael Guilbert on the topic “The Only Way Out is Through Out”, where they delved into emotions and other areas hardly touched by people.

Chukwulozie’s explanation of Obsidian as the title and a precious stone is more revealing.

“When the volcano erupts and the lava cools down and you put it in water it gives you this black stone called Obsidian”, she said.

“For us, the eruption of a volcano is a metaphor for something that is angry. When someone is angry they will say he erupted, he exploded, and there is so much language that uses what happens when a volcano erupts to describe what anger is. So, that being a stone or a beautiful glass that can be made into weaponry and can be used to kill or either made into Jewelry, which is meant to beautify, is intriguing.

“So, you get to choose what you do with your anger, you can either use it to kill or to beautify. Anger is the catalyst to the beautiful product, without anger of the volcano, we will not get Obsidian”.

But the highlight of the rainy Saturday outing for me was Chukwulozie’s Tarot Card Reading performance. At first I was confused with what the young artist was doing inside a white veiled space with an assemblage of materials for divination. On a closer look, they were not for divination. She was sitting down with full concentration, room in dead silence while reading the Tarot Card. The performance entails using tarot cards to gain insight into the past, present or future of things or people making enquiries from her.

It was a great performance for me, only that the question I wanted to ask was on who would emerge as president of Nigeria come 2023, but she is not a diviner, but a live art performer and a good one at that.

“Tarot card reading is part of the performance. For me, anything that has to do with spirituality is a portal. For us glass is a portal”, she said. 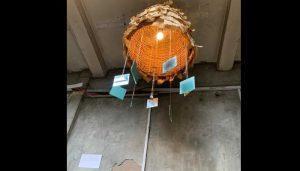 Explaining further the process of Tarot Card Reading, she said, “When people come and they want to get a reading, they don’t know what will come up neither do I. I don’t plan what to read. When they show up, I allow myself to be convinced that we can meet each other up, I can meet her and he can meet me wherever they are.

However, Tarot Card Reading is different from divination.

“Mine is more free form. I learnt about the tarot card, I read the card, I don’t go outside the keys because tarot has keys to understanding it and I read the keys”, she drew the lines between divination and tarot card reading.

She also took time to show me the other installations of the exhibition, particularly, Illumination and Streams of Consciousness. Both featured pieces of mirrors cut desired shapes like triangle and oval, some swinging on ropes, others hung on platforms, a few placed on sand among others.

She noted that the prayer is “such a huge surrender to divinity and forces that I do not know that still create some form of order to what might look like chaos. So, for me it is a stream of consciousness”.

Narrating another example of the installations, she said on her trip to Sierra Leone to visit her friend, her friend’s mother complained that her daughter had spiritual eyes, and can see things like spirits at night, which disturbed her sleep.

Finding solution, the mother, according to her, took her daughter to an Imam, because they were Moslems, and the Imam wrote some prayers on a chalkboard and then washed the board with water from the stream and used it to wash her eyes and it was gone.

“For me, that was a fascinating story; an act that someone can convince you that the problem has been solved. So, again, interactions and communications can be illusions for us, like what runs through our mind, we can delude ourselves more than what we convince ourselves about, when we look at the mirror”.

Expanding further on the illusion installation, she said, “Anything that has to do with spirituality for me is a portal. Illumination is big for me because sand comes from glass, glass comes from sand and in its most disintegrated form as well, it turns back to sand.

“So, the cyclical process, like things we think are far from each other like sand and glass, are actually one thing, but have gone through stages, and the only thing that divides them is time”.

She noted that sometimes knowledge is an illumination. “For me to understand that sand comes from glass, I was illuminated, my consciousness rose because it convinced me that God’s ability to transmute things is really large”, she said.

The exhibition also witnessed another beautiful installation titled ‘Ashes to ashes’. It featured burnt family pictures, though reprints, charcoal, different manifestations of wood, how wood can go through different burning among others.

She was worried that when time is gone, the picture will erode, and asked “does it mean that the memories have been eroded, does that mean that my family life did not exist”?

She also answered the question, saying, “So, burning was the fastest way for me to create this illusion of time passing and time eating, like taking these pictures away from me”.

The artist commended Tushar Hathiramani, who she said, “He has always been in a lot of work I am doing in Lagos and Nigeria”.

She looks forward to the repeat of the exhibition, maybe not in Berlin, but somewhere else. “I see it moving because we can create portals between different spaces, between different people, it is like getting to experience two different flavours of cooking. Imagine someone in Ivory Coast creating his own portal, someone in Czech Republic creating their own, people from different parts of the world will start creating their own portals from their own part of the world and we will all create positive energy”, she concluded.

Nigeria, Egypt, and the vision thing

‘Mother of all Law School campuses’ ready in PH