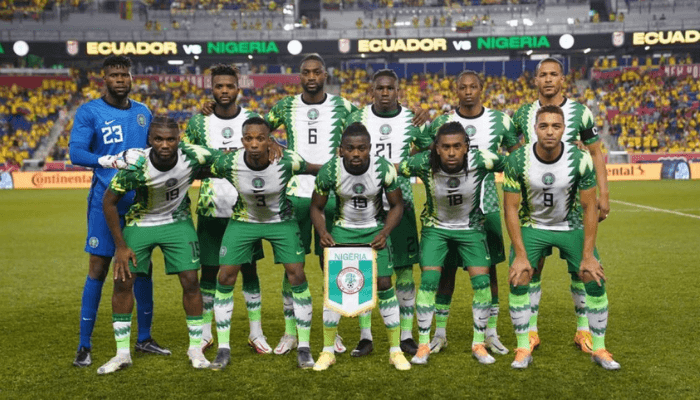 The Nigerian Super Eagles kick-started the journey to the Côte d’Ivoire 2023 competition on a shaky note defeating the Leone Stars of Sierra Leone 2-1 at the Moshood Abiola Stadium in Abuja on Thursday, June 9.

The Super Eagles are drawn in group A which comprises Sierra Leone, Sao Tome & Principe, and Guinea Bissau had its first match and victory on the way to the African Cup of Nations (AFCON) tournament rather in a very sloppy manner.

For Jose Peseiro, the new handler of the Nigeria senior national men’s football team, it is his first competitive match after assuming office in May. The Portuguese played two friendly matches against Mexico and Ecuador in the USA which he lost 1-2 and 0-1 respectively.

However, one noticeable error in the team which also played out against Sierra Leone is that sloppy start that has caused the team early goals. Against Mexico, the Super Eagles conceded the first goal in the 15th minute of the match before coming from behind to equalise in the 54th minute before Mexico went on to win the game.

And this shaky manner of starting a game has made many Nigerian football fans wonder if they should start getting used to the Super Eagles making slow starts and conceding goals early and then coming back strongly. Many fans are asking what is happening.

However, according to Tony Ubani, the sports editor of Vanguard Newspaper, it is too early to judge the new coach and his team.

“Though the team’s starting indices is not convincing anyway, and there are a lot of jobs ahead of the team, the defence is not convincing yet but we must understand it is just the coach’s first competitive match,” he said.

Ubani singled out Victor Osimhen as the only exceptional player, however, he noted that the morale of the players is still very low, and hence many of them could not live up to expectations.

“The team is still a work in progress,” he noted.

Similarly, Festus Eze, a football enthusiast believes that the team under Peseiro is progressively getting better.

“The coach has injected some positive game approach to the players which I believe with time will begin to yield dividends. The only player who seems not to have fitted into the coach’s tactics is Samuel Chukwueze. He was not in that game at all,” he noted.

The Super Eagles’ attacking prowess was quite an improved one compared to the team under Gernot Rohr. Peseiro’s game approach with double-prong attack of Osimhen and Umar against the Leone Stars paid off with a laboured win 2-1 win.

This tactic has shown the coach’s knack to have control of the ball and pressing for goals, though the team was quite unlucky against their West African neighbours.

The midfield, however, was a bit jittering with Alex Iwobi and Joe Aribo both attacking and energetic midfielders and without any holding midfielder in the thick of the central pack, leaving the Super Eagles struggling to get hold of the ball against their opponents.

The pitch was another spanner in the wheels of the Super Eagles on their way to AFCON 2023. It is unfortunate that Nigeria at this era could still be hosting international matches in such a field that could qualify for a farm.

This ordinarily calls to question the Nigeria Football Federation’s (NFF’s) commitment to quality delivery and sincerity of purpose in managing the country’s football. If the Abuja stadium is not ready, the match could have been shifted to Uyo or even Lagos.

How to Make Swift Codable Protocol Even More Useful – Grape Up

Psychology, self-respect, and the Nigerian Police