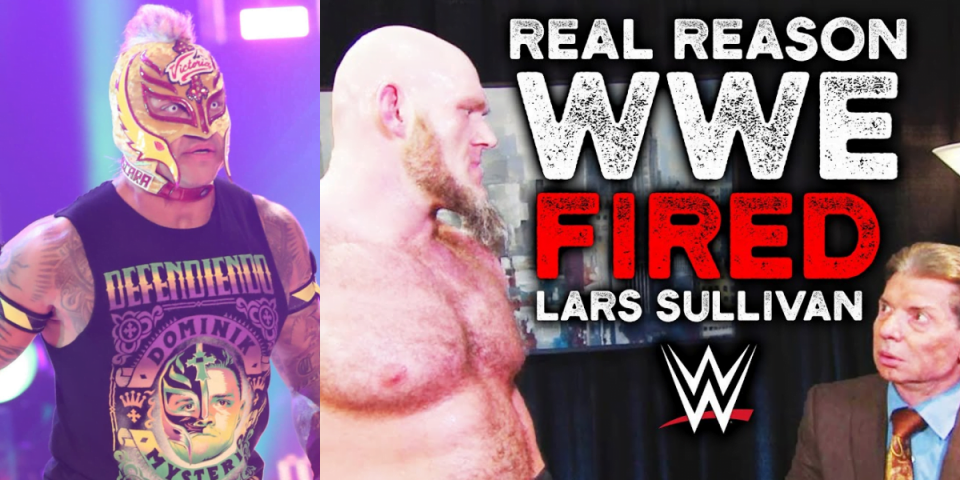 We talk here, WWE Rumours and spoilers on Rey Mysterio sign new WWE Contract. WWE Rumours and News on Why Vince McMahon fired Lars Sullivan from the WWE. THE Latest WWE news and rumors on Bad Bunny starts training at WWE Performance Center and more other WWE News and Rumors.

Last year, according to WWE Rumors both WWE in the process to held Rey Mysterio in the company for more time, while AEW seeking Rey Mysterio to bring in their promotion.

During one interview, Master of 619 said that he signs a new deal with the WWE and there is no plan to stop wrestling anytime soon.

“We never made the signing of my new deal public, but there is definitely going to be more time to see Rey Mysterio in WWE. I’m going to keep wrestling, at least until Father Time catches up and says, ‘It’s time to go.’”

Rey Mysterio on working with his son Dominik

Last year, WWE reports stated that Rey Mysterio never leaves WWE for AEW because of his son Dominik Mysterio who already signed a deal with WWE for multi-years. And in the interview, Rey Mysterio proved that WWE reports true and talked about his son and WWE.

“I am so happy to see my son Dominik doing so well, and it means so much to me to be with him in WWE. When I left WWE [in 2015], I was tired, I was beaten and I was going through a phase in my life where I just needed some time off. That time away recharged my batteries. During that period, I was given time to think about what I wanted to do for the rest of my life.”

“I sat down with my wife and my kids, and we ultimately made the decision together that it was time for me to come back to WWE. I am thankful for that opportunity because I knew my son wanted to be part of this industry, and I wanted to reopen the door for Dominik to eventually get a foot in the business. WWE has treated me like I had never left, and I am so grateful and truly blessed for that. I’m under WWE’s wings once again, and they’ve seen such potential in Dominik and such a bright future for him.”

Early WWE Rumors and Spoilers 2021 suggested that WWE let go, Lars Sullivan. It’s been a long time that WWE took off Lars Sullivan from WWE TV. Now WWE gives official words and said that Lars Sullivan was released by the company a month ago.

Now WWE Latest News and Rumors stated that the speculation buzzing around that WWE has no plans for Lars Sullivan and that’s why they released him is not true. Vince McMahon knee to push Lars Sullivan but superstars did not show up on TV.

In the past in 2019, WWE initially planned a big feud for Lars Sullivan’s debut match on the main roster and that is with John Cena. According to WWE plans, at Royal Rumble 2019 John Cena makes an appearance and Lars Sullivan attacked him and start the feud. This feud ends at Wrestlemania 35 where this two clash with each other.

But Lars Sullivan got an Anxiety attack and WWE plans are scrapped. After a short period of time, Lars Sullivan makes his WWE return and attacked so many top WWE superstars including Kurt Angle, Rey Mysterio, and The Hardy Boyz. But again he has suffered from injury this time knee injury and WWE has to take him off from TV.

Lars Sullivan’s WWE career was certainly a controversial one

After many months, Sullivan again showed up on WWE TV and this time also WWE has big plans for him. On his return, he attacked Riddle, Jeff Hardy, and The Miz. Then we saw him in a few backstage interview which is based on his life. This interview was supposed to lead towards Lars Sullivan’s big push and WWE transits him into a monster.

Here are Lars’ Sullivan’s words during those interviews:

“I’ve been bullied my entire life for the way I look. For the way, I talk, the way I dressed those bullies. They would push me down. They would kick me, They would steal my lunch.”

“Well, then 13 years old, started lifting weights and learned how to take care of myself. I gained about 50 pounds of muscle in the span of 18 months and the bullying stopped. In fact, I became the bully. I bullied the bullies and that was so much fun and I bullied the kids who would just stand there and watch and laugh at me at my expense.”

But again Lars Sullivan disappears from WWE TV without any reason. And now he is released by WWE.

WWE news and rumors suggested that whenever Bad Bunny enters in WWE ring to wrestle a match then it’s against either The Miz or John Morrison. Maybe we could see Bad Bunny in tag team action alongside Damian Priest against The Miz and John Morrison which also make sense.

Bad Bunny is rumored to compete at WWE WrestleMania

Tag Team match allows Bad Bunny to do only that thing in which he looks comfortable without competing during the whole match. This way WWE could also protect him. At the same time, WWE also books Damian Priest strong in that match.

Lars Sullivan finally breaks the silence and speaks on his WWE release. In his recent interview, Lars Sullivan talked about his WWE departure. WWE quietly released Lars Sullivan last month and that new coming out this week.

According to WWE Rumors, WWE’s decision of Lars Sullivan’s release keep secret is quite surprising. He said that WWE went through with it with compassion and honesty. Lars Sullivan also said that his anxiety problem got bets out of him. So he contacts WWE officials and told them that he couldn’t wrestle anymore with these issues.

Lars Sullivan lost his father last year and that is one of the reasons for his personal struggles. He considers himself as his biggest and worst enemy. Lars Sullivan took all responsibilities on himself for these issues and marred his professional career. He also said that now his wrestling career is over.

During his whole WWE career, Lars Sullivan always bounded with some controversies. Every now and then he made headlines for the wrong reasons. Now it’s sad to say that a giant like Lars Sullivan can’t see to compete in a pro wrestling ring anymore.

Edge made history at Royal Rumble 2021 where he entered at the #1 position and won the Royal Rumble match. He is only the fifth WWE superstars after Shawn Michaels, Vince McMahon, Chris Benoit, and Rey Mysterio who already achieve this feat.

In a recent interview, Edge shows his interest to make a tag team with Christian and wants one more tag team WWE run.

Not even talked about tag team run but he also suggested some dream matches with tag teams that WWE fans always like to see in the future. He also talked about that moment when he saw Christian come out and walked down to the WWE ring in the Royal Rumble match.

“Here’s the beautiful part, here’s where wrestling can work at its purest, best level. When you have reality and truth, and real emotions that can’t be fabricated. That can’t be written, that can’t be scripted.”

“So the look you saw on my face as Christian was coming down the ramp, that was real. That was me being part dumbfounded. We were both in the Royal Rumble in 2021 after being told we could both never do this again. Proud – there was pride because I know how hard he worked to get back to the point where he could be cleared. Which was evident by looking at him.”

“There are so many emotions in that moment and in that look. Because I’ve known he’s been cleared for a little while, right?”

These are the whole WWE News, Rumors, Updates, and Spoilers from the edition of WWE Rumor Roundup. We covered WWE Rumors Roundup: Rey Mysterio signs a new WWE contract, Why WWE fired Lars Sullivan, and more.

Click below to know Latest WWE News and Updates for 2020:

WWE Rumors Roundup: WWE Plans for The Fiend, Edge set to appear on both SmackDown and NXT shows, and more.

Federated Learning in the Automotive Industry– Grape Up

Know about WWE’s upcoming event, Money In The Bank 2022