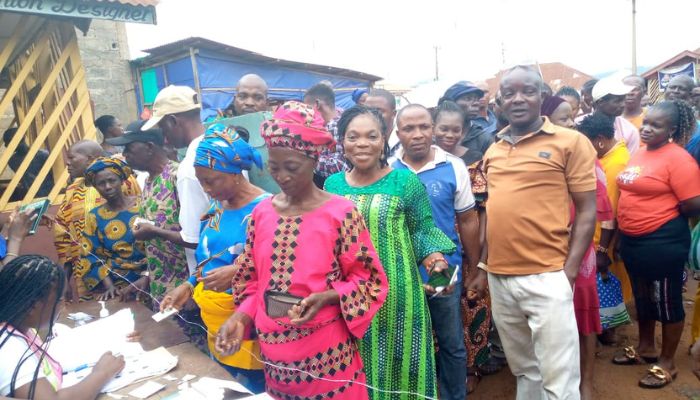 Since the fiasco of the 2007 elections in Nigeria, we have progressively witnessed lower voter turnouts in subsequent elections. The Independent National Electoral Commission (INEC) figures show that in 1999, voter turnout for the presidential election was 52.3 percent. In 2003, turnout increased to a whopping 69.1 percent. In 2007, it declined again to 57.49 percent.

After the embarrassment of the open rigging – and especially in Anambra State where INEC in Abuja rushed to announce the result of an election that was still ongoing and allocated more votes than the total number of registered voters in the state to a single candidate before shamelessly revising it downwards when it realised the absurdity – serious efforts have been made to reduce incidences of open rigging and allocation of fictitious votes to candidates.

That was when the voter turnout began trending downwards. In 2011, it was 53.68 percent, 43.65 percent in 2015, and declined to a record low of 34.75 percent despite a massive increase in the number of registered voters to 82 million.

I have a hypothesis to explain the lower voter turnout in recent elections. But first, let me say the obvious fact that our electoral system is so rigid and inflexible that many voters are effectively disenfranchised by the fact that they moved locations between elections and did not take the pain to navigate through the clumsy Nigerian bureaucratic system to transfer their voter registration to the new place.

Besides that, I think the gradual improvements in our conduct of elections and the innovations by INEC have been responsible for the low turnout. It is most probably the case that the figures before 2011 were a bit arbitrary or inflated.

In the 2007 gubernatorial election in Anambra, for instance, INEC frustrated elections in Anambra by refusing to release election materials early, releasing them only sparingly and so late in the day that majority of those who turned out to vote, including the governor of the state, could not vote. Yet, while that was happening, INEC was busy declaring results in Abuja, which gave Andy Uba more votes than the total number of registered voters in the state. In some other places like Delta State, turnout in some local governments were as high as 95 percent.

So shameful were the elections that, as reported by the Economist on April 19, 2007, “European Union election observers privately said that in half a dozen states there was no real election.” Figures were just prepared even before elections and INEC chairman in Abuja, Maurice Iwu, just reeled them out. The losers were tauntingly asked to go to court – knowing proving electoral fraud cases in court then was a herculean task for most contestants.

Following the outcry from those elections and the determination of the Yar’Adua/Jonathan administrations to make votes count, there began gradual but concerted efforts to improve the conduct of elections and make it difficult for politicians to manipulate.

Although those efforts have had mixed results, we can see that politicians are now genuinely trying to curry favours from voters and not like before when an un-named politician campaigning in my part of Benue State arrogantly tells the people that whether they vote for him or not, he will still win the election. And he did win many elections even though the people resented him. They will overwhelmingly vote for his opponent, but he will still be declared the winner. But, I digress.

As politicians are now forced to appeal and compete for the people’s votes, they are also refining their strategies to subvert the people’s will even when the elections appear to be free and fair.

The recently concluded governorship election in Ekiti State points to the new strategy – directly buying the votes of people least likely to vote for a candidate. Reports from the state indicated that unlike the old practice of sharing food or groceries among supporters shortly before or during elections to encourage them to come out to vote, the new strategy involves stationing agents at polling boots with raw cash to purchase votes on election day.

The most impressive thing about this new strategy is that it will not be deployed state-wide but only targeted at places where the candidate is least popular or among the population least likely to vote for the candidate or least able to resist the offer. This leaves room for plausible deniability and conflicting reports, which makes it difficult to prove voter inducement on a scale that will affect the results.

Since Nigeria’s electoral system does not require winners to score a majority of votes, the aim of this strategy is to maximise a candidate’s votes in the area where s/he is most popular and buy enough votes from the support bases of his/her opponents to get him/her past the post.

The strategy seems to have worked, at least for now. With the unprecedented poverty, unemployment, and deprivation in the country, it is difficult to see voters repudiate a N7000 or N10,000 offer to sell their votes.

With the party primaries already hijacked by money bags, and the two prominent candidates desperate to fulfil lifetime ambitions to be president (with this election being their last chance), my projection is that this strategy will be deployed for the 2023 presidential election and other down ballot elections. They both have the war chest to pull this off, and going by results from Ekiti, it is a winning strategy.

A trajectory changer of Nigeria’s economy